For those who happen to be in New York on March 5: My “17 Sekunden Kunst” (“17 Seconds Of Art”) series is part of The Art Film Festival at the Hunter College!

Swiss curator, critic and art historian Paolo Bianchi, who commissioned the series a while ago for Upper Austria’s OK Centrum, wrote about the piece in the catalogue: “For years, Lena Lapschina has been filming everyday situations while traveling, which oscillate from the absurd to the banal. She uses this to make short videos that present in only 17 seconds art. The films all are dealing with art, but most of all with the perception of art. In the video ‘Once around the block’ a man leaves a party in Vienna City to get some fresh air, takes off his clothes, runs once around the block and puts his clothes calmly back on. A quicker answer to the question ‘What is art?’ is hardly imaginable.”

“17 Sekunden Kunst” for some years had tagged itself an “ongoing series” and comprises two dozens or so stand-alone films and mini-series. At Park Avenue, I’m going to show five pieces: 1. “Artist in residence”: Lena Lapschina’s artist trilogy. 2. “Once around the block” (original title: “Einmal um den Häuserblock”): Vienna, the city of actionism, revisited. 3. “Making friends”: About creation and subjective awareness of a friend. 4. “Bowing takes practice” (original title: “Verbeugungsübung”): Facing the authorities should be well practised. 5. “Eugen’s Appartment”: A mini-soap in 7 episodes.

“17 Sekunden Kunst” by Lena Lapschina is available as a limited pizza box edition. 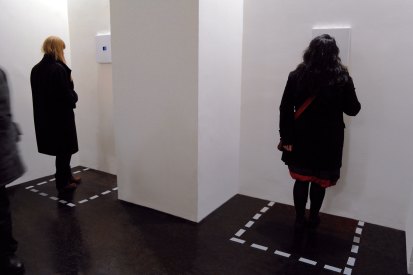